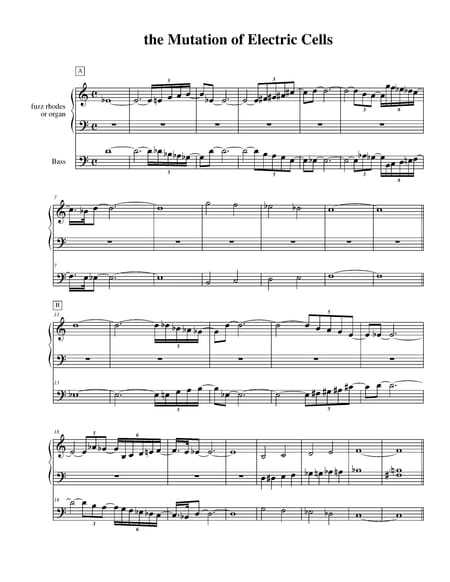 Some of the titles have no direct relation to the "Defense Mechanisms" concept. Let's say those tunes are just defense mechanisms by themselves (sublimation through music!).

{you can find this track in the player on the left}

The original cells (or motifs) are mutated in all sorts of ways (inversion, augmentation, retrograde, exchange, superimposition). An intellectual, geometric process, certainly, but the Ear always has "the last word".

The first part (Tension) is made up of 4 parts, or verses. Each one of these verses uses the same material, arranged in a different way.

The second part (Release) uses the harmonic tail (or refrain) of the verse, and loops it, giving way to a dramatic piano/Rhodes duel, before the main cell reappears on top of the chords. This might be my personal favorite moment on the album. A true musical orgasm!

The whole piece might be THE big surprise/satisfaction of the album, for me. Thanks to the multiple keyboard overdubs, and the way everybody played. I wanted it to be the album closer, but engineer Aaron Nevezie advised me to put it earlier.

The first part was pretty quick to record (with the help of a click). The second one was another story. I had initially planned to have a "keyboard trio", where organ , synth, and Rhodes would have built some sort of triple solo. We ended up with a classic "call and answer" duel between piano and Rhodes. Some synth strings were added (Dave Smith Prophet synth).

Below is the very first take. The tempo happened to be too fast. I used the piano mic track to give the drums some more "body". (That's right, the drums were bleeding through the walls (!)