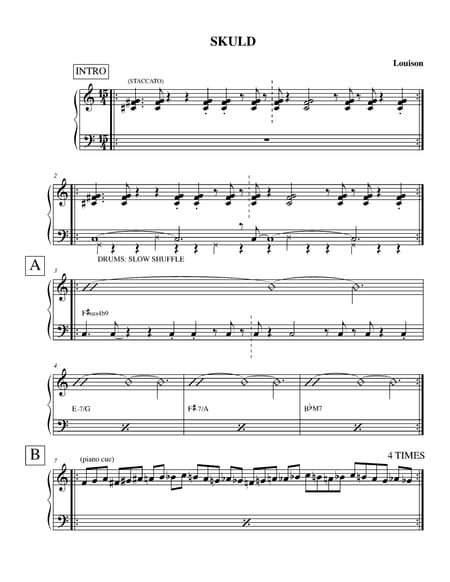 Skuld is the name of one of the three Norns. The Norns are godesses from the kingdom of Asgard. Urda, Verdandi and Skuld, respectively decide the past, present and future of men. (As in Greek and Roman mythology).

This tune was part of a triptych I wrote back in 2003 for Soundchaser's first album. Skuld was recorded but didn't end up on the album, due to lack of space. I had an interest in Norse mythology since my childhood (I was a big Saint Seiya/Knights of the Zodiac fan). Also, I'm fascinated by the Time phenomenom - memories, anticipation, carpe diem, the musical time, etc...

{The track is in the player on the left}

In the original version, there was a long sax melody, each chord duration was twice as short, and there was only one rhythmic feel.

In the 2009 version, the melody's gone, the chord progression's been stretched, and the drums interpret the 15/4 meter in three different ways (half-time shuffle; drum'n'bass; swung).

The form is more or less an ABA, B being the bass solo.

The very last section is pure free improvisation. Casimir in all his atonal insanity!

By suddenly changing the rhythmic feel (especially from 15/2 Drum'n'Bass to 5/4 swing), I tried to create a "surrealistic", surprising effect: Our minds condition the way we anticipate the future. We often see the future as a logical succession of events. But that perspective could change radically in a finger snap. "Everything is possible". Even a dark Drum'n'Bass groove can turn into a free swing moment...

We recorded the bass solo section thrice. The first two were pretty straightforward (see bottom of the page), but I wasn't fully satisfied. The third take is unique for me as a musician: For some reasons I can't tell here and now, I got really pissed off shortly after the solo began. So I just turned my Big Muff distortion pedal on, in anger, and started playing with an "I don't give a ****" attitude...

At first I didn't like that solo, the distortion was too much. And not enough control; Too dirty. I liked the very end though, with the harmonics. Matt Garstka (drummer) immediately loved it. He told me something like: "Man...what you just played.....you can't analyze that...". Aaron (engineer) also liked it. A few days later, I was convinced.

There's a dramatic, epic progression in that solo, and the ending with the harmonics is an interesting climax (that wasn't planned).

Below is one of the other bass solo takes: