This is the first in a series of blog entries about each of Defense Mechanisms' nine tunes. I will talk about the titles, the compositions, and the recording process. Some of the "tricks" will be revealed... 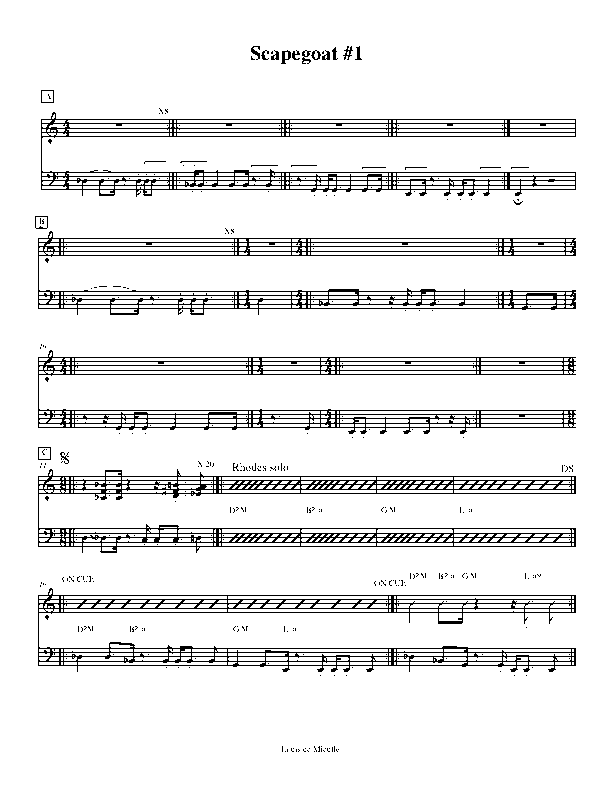 (above: Scapegoat 1 - page 1 of 2) (some hand-written annotations are missing)

Scapegoating is an integral part of human's behavior. I guess it begins in elementary school, where children realize the power of coalition. Two children are stronger than one. More important, it's the first display of that cowardice, which will remain constant in society: the more people are in a group, the less these people feel responsible for their acts.

Anyway... This track is dedicated to all the scapegoats AND their tormenters - I guess I believe in Forgiveness and Redemption...!

(listen to the track in the player on the left)

The whole piece is based on the first bar rhythmic pattern (see score above). This is a process I use a lot. Economy of Means, or how can you build a piece from a simple, minimal idea.

The intro is made of two contrasting moods: the first one is kind of dark, menacing; the second one is brighter, relaxed.

The Interlude (letter C) sees the original pattern being mutated from 4/4 to 9/8 (I just added an 8th note). The drums play a very "Meshuggah-ish" kind of groove (steady snare/cymbal + displaced kicks).

The piano solo might represent the Scapegoat's wish for happiness. The chord progression is simple and heartening. Cas builds it up to a frenzy, as the harmonic rhythm gets faster and faster.

The last part starts with the 9/8 pattern played in a "Mahavishnu Orchestra" way (= drums locked with the bass). Then some aery Rhodes chords propose a different interpretation of the 9/8 (3 groups of 3 eights notes), before the Interlude's return.

Right now, I don't want to reveal how everything was made. I think it's preferable to leave a part of mystery - as you would do by not revealing the full recipe for a dish...

Still, here are a few infos:

- I used an EBS OCTAVE bass pedal to reach those low notes.

- On the Interlude, you have up to 3 different bass tracks.

- The first take originally featured a Rhodes solo, but Cas asked me to use the piano instead. I agreed - the piano is a richer instrument, by all means, especially when it's a Steinway...!

Below is a video of Cas recording the crazy ending of his solo, at the Bunker Studio (Aaron Nevezie in command):